Learn more about McNess products at our historic website: www.FWMcNess.com! 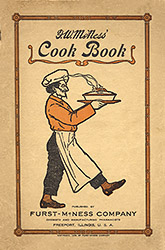 McNess home products were created in 1908 when Frank E. Furst and Frederick W. McNess founded the Furst-McNess Company in Freeport, Illinois. Their line-up of home and health products were sold through the “McNess Man”, salesmen carrying wares across America by horse and buggy. The “store on wheels” approach later was replaced by automobiles and later saleswomen joined the McNess men to help sell the products. 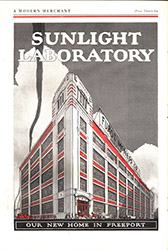 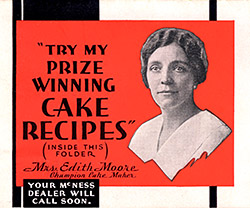 By the early 1930s, Mrs. Edith Moore was touted for winning over a thousand prizes for her cake baking and taking on the label “The Champion Cake Baker”. She attributed her success to using the McNess vanilla, extracts and other baking products. Later the extracts took on the “Champion” name which still adorns the McNess Champion Madagascar Vanilla Compound to this day.

In the 1940s, Furst-McNess Company developed a new technique for tablet manufacturing for the US army and supplied food tablets for the war effort. 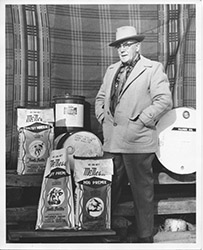 By the late 1950s, the company expanded its line-up to include agricultural vitamins and mineral premixes for the dairy, beef and swine industries. The agricultural division soon became the more prominent part of the company. In 1992 the company acquired Miracle Feeds and expanded internationally. 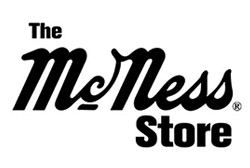 “Our relationship with them is what made this business arrangement happen,” said Matt Heinrich, President and CEO of Furst-McNess Company. “Their marketing company has been involved in branding efforts for our company for a number of years, so we know they understand who we are and what our brand means. This trust was absolutely essential in creating this licensing agreement.” 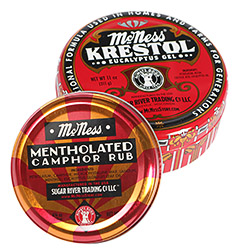 Furst-McNess Company now concentrates on their agricultural products from their offices in Freeport, Illinois. Sugar River Trading Company is working to grow its network of resellers while operating McNessStore.com to reach individuals not serviced by local merchants.

In addition, Sugar River Trading is working to bring back some of the McNess products that have been discontinued over the years. They have already brought back the “Mentholated Ointment” (now called Mentholated Camphor Rub) as well as the McNess Degreaser. They are currently working on bringing back the Pudding and Pie Mixes as well as some of the more popular Seasonings.